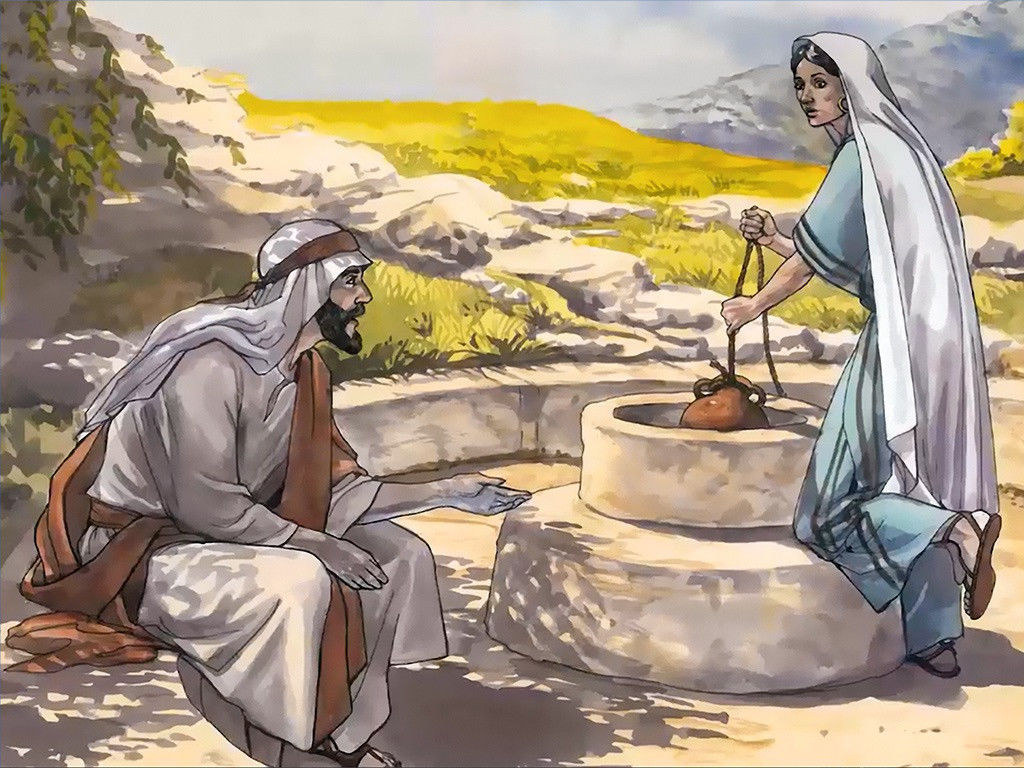 Jesus and His disciples were traveling through the land of Samaria. They came to a city called Sychar.

There was a well there, where the people of Sychar drew their drinking water. Jacob, the father of Israelites, had dug the well long ago.

The early afternoon was probably sunny and hot. Wearily, Jesus sat down by the well while the disciples went into Sychar to buy food.

Jesus was all alone – but not for long. A woman who lived in Sychar came to draw water. “Give me a drink,” Jesus said to her.

The woman was surprised. “How is it that you, being a Jew, ask a drink from me, a Samaritan woman?” she said. In those days, Jews had no dealings with Samaritans!

She was probably even more surprised when Jesus said, “If you knew Who I am, you would ask Me for living water.”

The woman said to Jesus, “Sir, You have nothing to draw with, and the well is deep. Where then do You get that living water? Are you greater than our father, Jacob, who gave us the well…?”

Jesus asked the woman to go and call her husband. “I have no husband,” the woman answered. “You have had five husbands,” said Jesus. “And the one whom you now have is not your husband.”

The woman recognized that Jesus was a prophet. She tried to get Him to argue about where to worship God: Jerusalem or the Samaritan’s holy mountain. Jesus said true worshipers worship the Father in spirit and in truth.

“I know that Messiah is coming,” the woman said to Jesus. “When He comes, He will tell us all things.” “I who speak to you am He,” Jesus told her. Just then, the disciples came back. The woman left her expensive water pot there by the well and returned to the city.

“Come, see a Man told me all things that I ever did,” the woman told the men of Sychar. “Could this be the Christ?” The men left the city to go and see Jesus for themselves.

Meanwhile, the disciples told Jesus to eat. But Jesus said, “My food is to do the will of Him who sent Me, and to finish His work.” His work was to bring people to God.

Many of the Samaritans believed in Him because of the word of the woman. They asked Jesus to stay with them; and He stayed there two days.

Many more believed because of Jesus’s own word. They said, “… we have heard for ourselves and know that this is indeed the Christ, the Savior of the world.”

This short Bible story is found in John 4