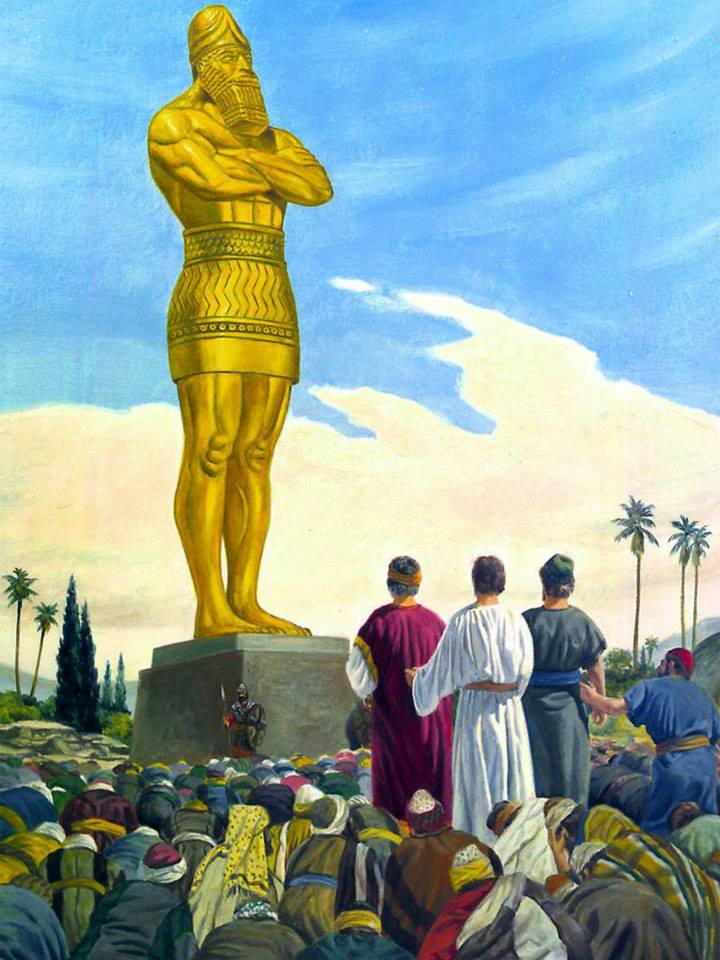 King Nebuchadnezzar built a huge golden statue. It was gold, from head to foot. Maybe the king had forgotten the dream God sent to tell him his golden kingdom would not last forever. Maybe he thought if he built a statue made completely of gold, then God’s word in his dream would not come true.

Everybody did what the king ordered- except for three men. These men were Hebrews. They were Shadrach, Meshach, and Abednego, friends of Daniel. It seems Daniel wasn’t there at the time, for surely he too would have refused to worship a man-made idol.

The king’s wise men were jealous of Daniel and his friends because the king liked them. So they said, “There are three men whom you have placed as rulers over the province of Babylon – Shadrach, Meshach, and Abednego. These men, O king, do not obey you. They do not server your gods nor worship the golden statue which you have set up.”

King Nebuchadnezzar was filled with rage. He warned them, “If you do not worship, you will be thrown into the middle of a burning fiery furnace. And which god will deliver you out of my hand?”

The king was making a big mistake. He was really challenging the living God. The three Hebrew men knew it was against God’s law to worship a statue. They stayed standing. Because they trusted God, they were not afraid of the king.

These three brave men had an answer for the king. They said, “Our God whom we server is able to deliver us from burning fiery furnace. But if not, let it be known to you, O king, that we will not serve your gods nor worship the golden statue which you have set up.”

King Nebuchadnezzar was furious! He commanded that they should heat the furnace seven times more than it was usually heated. Still the men would not kneel.

The king commanded mighty men in his army to tie up Shadrach, Meshach, and Abednego, and to throw them into the burning fiery furnace.

The furnace was so hot that the men who threw Shadrach, Meshach, and Abednego into the fire were killed by the heat.

The king watched from a safe distance. He saw the three men being thrown right into the middle of the blazing furnace. But that’s not all he saw.

Everybody gathered around and examined the three Hebrews. They had seen that the fire had no power to burn them. Their hair wasn’t scorched and their clothes were not burned. There was not even the smell of fire on them.

When he realized what had happen, King Nebuchadnezzar did something very wise. He prayed, and said, “Blessed be the God of Shadrach, Meshach, and Abednego, who has sent His Angel and has delivered His servants who trusted in Him.”

A short story from the Holy Bible found in Daniel 3