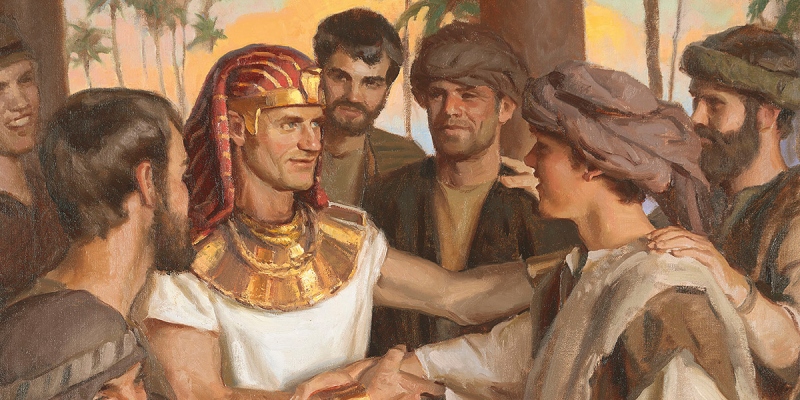 Joseph was wrongly placed in prison by his former master, Potiphar. In prison, Joseph was obedient and helpful. The warden trusted Joseph to organize prison life. Because God was with Joseph, prison became a better place for everybody.

The king’s baker and butler were in jail. “Why are you so sad?” Joseph asked them one day. “No one can show us what our dreams mean,” the troubled men replied. “God can!” Joseph said. “Tell me the dreams.”

“Your dream means that in three days you will be back in King Pharaoh’s favor,” Joseph told the butler. “Remember me and ask Pharaoh to free me.” The baker’s dream held bad news. “You will die in three days,” Joseph said. Both dreams came true.

But the butler forgot about Joseph until Pharaoh woke up troubled one day. “I’ve had a dream,” he cried. None of his wise men could show him its meaning. Then the butler remembered Joseph in prison. He told Pharaoh about him.

Pharaoh sent for Joseph immediately. “Your dream is a message from God,” Joseph told the king. “Egypt will have seven years of plenty, then seven years of awful famine.” “Plan now to store food during the seven good years,” Joseph advised Pharaoh, “or your people will starve to death in the famine.” “God is with you,” Pharaoh declared. “You will take charge in Egypt, second only to me.”

Seven years of plenty came. Then seven years of famine. Food was scarce everywhere except in Egypt where they had wisely stored huge supplies. In Joseph’s far off homeland, Jacob’s family was starving.

People from all countries went to Egypt to buy grain. “You must go, too,” Jacob commanded his sons, “or we will starve to death.” Arriving in Egypt, the sons prepared to buy food.

Jacob’s sons bowed low before the lordly person in charge of Egypt. They did not recognize Joseph, their brother. But Joseph knew them. Joseph remembered his boyhood dreams. God had raised him above his brothers.

Joseph was very wise. He spoke roughly and kept his brother Simeon hostage. “Take food, go home and return with your youngest brother,” he ordered. “Then I will know you are not spies.”

The brothers thought that God might be punishing them for selling Joseph as a slave many years before.

Jacob and his sons were confused. “Our money was returned in the grain. And the ruler said we must bring Benjamin.” Jacob would not let Benjamin go. But soon the food was used up. The brothers had to go back to Egypt. Benjamin went with them.

When Joseph saw Benjamin he ordered his servants to prepare a great feast. The brothers were invited. “Is your father alive and well?” Joseph asked. Perhaps he was thinking of how he could bring the whole family together.

Joseph also wanted to know if his brothers were really sorry for their sin of many years before. After the banquet he accused them of stealing. “To punish you, I will keep Benjamin as my slave,” Joseph said. “My lord, take my life instead,” begged Judah. Joseph knew that Judah, who had suggested selling Joseph, was truly changed.

No longer able to hide his love for his family, Joseph sent all the Egyptians out. Then he began to weep. “I am Joseph your brother, whom you sold into Egypt.” Amazed and afraid, the brothers said nothing. Joseph encouraged his brothers. “God made me lord in Egypt so I could save your lives in this famine. Go, bring my father. I will look after you.”

Jacob and Joseph were reunited in Egypt and the whole family lived there in peace and plenty.