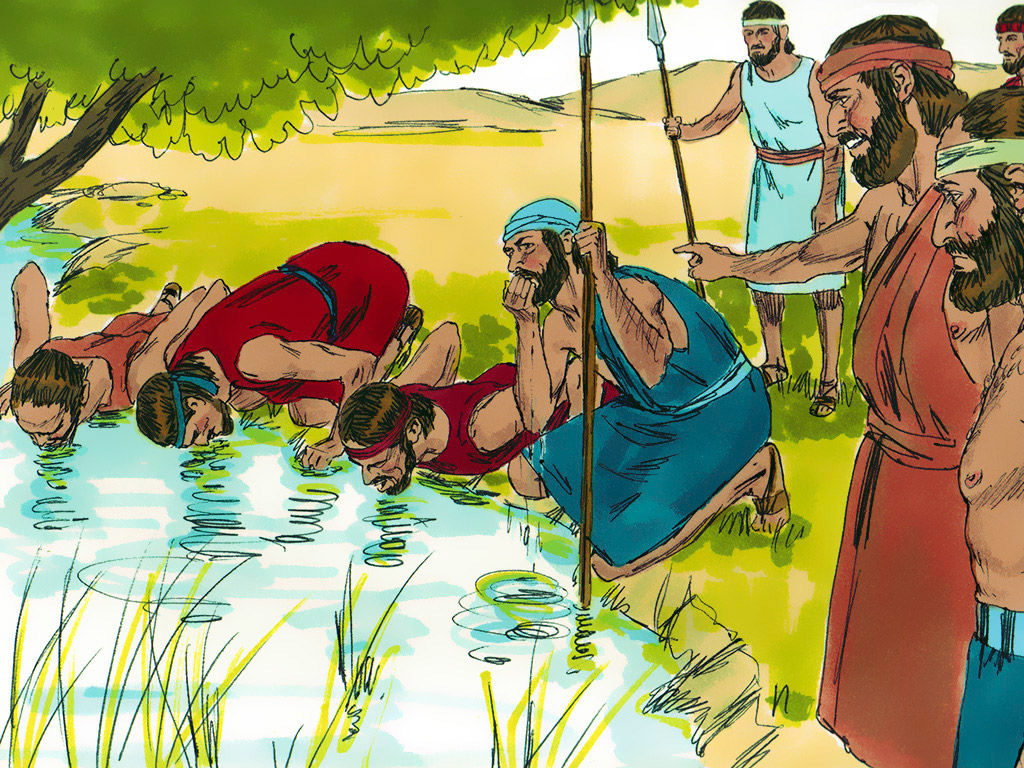 The original image is copyright of Sweet Publishing and digitally adjusted copyright of www.FreeBibleimages.org

The story of Gideon starts out with God not being very happy with his people, the Israelites. If you remember the Israelites were the ones God saved from Pharaoh. The people Moses led across the Red Sea on dry ground.

Hundreds of years had passed since then but throughout all of God’s miracles they had experienced, they still did evil in the eyes of the Lord.

There were consequences for these actions. That means that when they did something wrong God didn’t bless them but gave them into the hands of the Midianites.

The Midianites weren’t their friends. They took or ruined all their crops and animals. The Israelties had to hide from them in caves.

After Israel had nothing left they finally cried out to God for help. God heard their cry (like he always does) and had a plan.

The cool thing about all this is that God wasn’t happy with the Israelites but He still listened to them and answered their prayer!

This is where Gideon comes into the story. He was threshing wheat in a hidden place so that the Midianites wouldn’t see him and steal the wheat, when an angel of the Lord came and sat next to him.

The angel spoke to him and said, “The Lord is with you, mighty warrior.”

“But sir,” Gideon replied, “if the Lord is with us why is all this bad stuff happening? Where are all the miracles our fathers (the people that crossed the Red Sea) told us about?”

The Lord replied to Gideon, “Go with all your strength and save Israel from the Midianites. I am sending you to do it.”

Then Gideon started all the excuses. “But Lord, how can I save Israel? My people are the weakest in Manasseh and I am the smallest and the youngest in my family.”

I think God probably smiled here, but He said “I will be with you, and you will defeat all the Midianites together.”

First he prepared an altar as an offering for God. This was the way they gave gifts and ask for forgiveness to God before Jesus died on the cross.

He set his offering (meat and unleavened bread) down on a rock and fire came from the rock completely consuming the meat and bread. And the angel of the Lord disappeared.

Then Gideon realized that it was the angel of the Lord.

That same night the Lord told Gideon to take down the altar his father had built for a pretend God (Baal) and to cut down an Asherah pole (this was made for another god people wanted to worship).

The Israelites had started believing in these fake gods and that’s why God had been angry with them. He is the only real and true God and these people were praying and giving offerings to pieces of wood and statues that can’t do or hear anything.

So Gideon took ten of his servants at night (because he was afraid of getting caught from the people in the town) and tore down the altars.

The people were mad when they realized Gideon had wrecked their altars but they decided that if Baal was really a god he could punish Gideon. Of course nothing ever happened to Gideon because Baal isn’t real.

When Gideon checked the wool in the morning it was soaking wet and the ground was dry. Still Gideon asked for one more sign…

This time he asked that the fleece would be dry and the ground would be wet. Sure enough, the next morning it was just as Gideon asked.

So Gideon gathered up an army and started out for the Midianite camp. Gideon was probably feeling pretty good about things. He had lots of men to help him fight and God promised he would help them win.

God had something a little different in mind. He told Gideon he had too many men in his army. He knew that Israel would think they defeated the Midianites on their own without God’s help.

So God said to Gideon, “Announce to the people, ‘Anyone whose afraid may go home now’.” Amazingly twenty-two thousand of the men left! That’s a lot of people! More than half of the whole army went home. Only ten thousand stayed.

Gideon still felt alright. At least they had ten thousand men, right? Not for long. The Lord told Gideon he still had too many men.

When they went down to the water for a drink the Lord told him, “Separate the men that drink the water like a dog and the ones that get on their knees and drink from their cupped hands.”

I’m thinking this took quite a while with all those men but Gideon did it. It’s surprising, but only three hundred men got on their knees and drank from their hands. All the rest looked silly drinking like dogs!

Gideon didn’t know how God was going to help them win. There were so many Midianites against just three hundred of them so he worried and wasn’t getting any sleep. So, God decided to help Gideon and make him feel better about things.

During the night the Lord spoke to Gideon, “If you are still afraid that I’m going to help you win, go down in the valley with your servant Purah where the Midianites are staying and listen to what they’re saying. You’ll feel much better after that.”

Guess what Gideon did? He was still afraid and took Purah and snuck down to the Midinaite camp. Just as he arrived he heard one of them talking to his friend about a dream he had. He was saying, “I dreamt that a round loaf of bread came rolling into our camp. It came so fast that it ran right into one of our tents and made it fall over.”

His friend responded, “This must mean the sword of Gideon and that God will help him defeat the Midianites.”

As soon as Gideon heard this he worshiped God and ran back to the camp. He returned and called out, “Get up, the Lord has given us the Midianite camp!”

Gideon divided all the men in three groups and gave them all trumpets and empty jars with torches inside.

Gideon and the men surrounded the camp in the three groups (remember they were up high looking down into the valley). When Gideon started to blow his trumpet the rest followed.

The rest that got away were captured by the men of Ephraim by the Jordan because Gideon sent messengers ahead of them to let them know they were coming.

That was the day God saved Gideon and defeated the Midianites. Without God none of this was possible. I hope that after this Gideon learned his lesson and stopped worrying. With God nothing is impossible!

Next time you’re in a tough situation know that God can give you strength and he wants to help you. Just ask and He will!