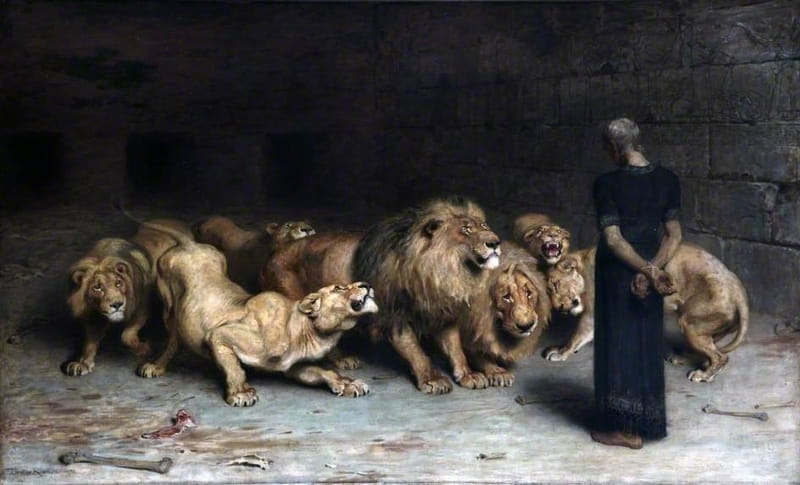 Daniel and the Lion’s Den

Darius was the new king of Babylon. He was smart. He picked a hundred and twenty of the very best people in his kingdom to help him rule. Then he picked three of them to be in charge. Daniel was one of those three men.

King Darius respected Daniel so much, he thought about making him the ruler over the whole kingdom.

The other leaders were jealous. They planned to find some fault in Daniel so they could get Daniel in trouble with the king.

No matter how they tried, these leaders couldn’t find anything bad about Daniel. Daniel was true to the king in all that he did. Also, he was careful and clever, and always did everything the very best he could.

The jealous leaders knew there was only one way they could trap Daniel. They knew that nothing on earth would stop him from worshiping the God of Israel.

Daniel’s enemies thought up a plan. They made a new law for the king to sign. The law said that everyone should pray only to King Darius. Anyone who disobeyed would be thrown into a den of lions!

The new law made no difference to Daniel. He did what he always did. He kneeled by his open window three times a day, and prayed to the God of heaven.

The jealous leaders rushed to tell the king. King Darius had no choice but arrest Daniel. The law had to be obeyed. Daniel had to die. The king tried hard, but he couldn’t find a was to change the law.

Daniel was sentenced to die by being put into a den of lions. Before Daniel was thrown to the hungry lions, King Darius said to him, “Your God, Whom you server continually, He will deliver you!”.

The King didn’t sleep that night. Very early the next morning, he rushed back to the lion’s pit.

King Darius shouted out, “Daniel, servant of the living God, has your God Whom you server continually, been able to deliver you from the lions?”. Maybe he didn’t expect an answer But Daniel replied!

Daniel called out, “O king, my God sent His angel and shut the lion’s mounths, so that they have not hurt me! And also, O king, I have done no wrong before you.”.

King Darius was delighted! He ordered Daniel to be lifted out of the pit.

The king knew God had delivered Daniel and that Daniel’s enemies were God’s enemies. He gave a command, and all those who tricked him to sign the bad law were thrown into the lion’s den. The lions ate them.

King Darius wanted the world to know that the God of heaven had protected His faithful servant, Daniel. The king wrote a letter that commanded everybody to worship the living God. And the king restored Daniel to honor and leadership.