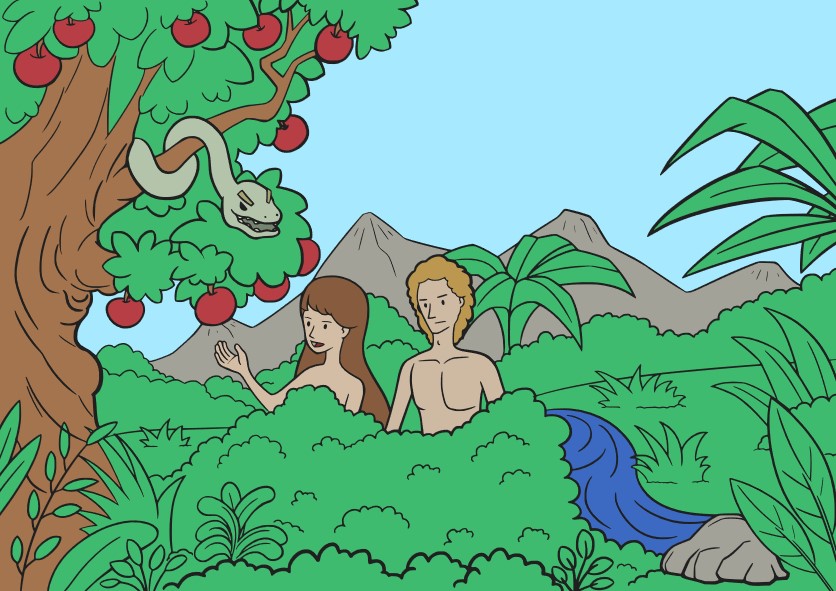 After creating the world, God made a beautiful garden, called Garden of Eden. It was a paradise full of animals, fruits and trees. At the center of the garden, there was a tree with a special power to give the knowledge of good and evil to the person who ate its fruit. Adam was the first man created by God. God told Adam to look after the trees in the garden and warned him, “You may eat fruits from any tree you like, but not from the Tree of Knowledge. If you do not obey, you shall die:”

To give company to Adam, God created a female from his ribs, and named her Eve. Both Adam and Eve lived naked in the Garden of Eden, as they had no sense.

In the same garden, there lived a snake. It advised eve to eat the fruit from the Tree of Knowledge, and told her that if she ate the fruit, she would become wise like God. Tempted by this, Eve ate the fruit and made Adam also eat it.

Next day, when God came to the Garden, Adam and Eve hid themselves from Him, as now they had gained knowledge.

God asked them, “Did you eat the fruit from the Tree of Knowledge?” The two admitted. God became angry and punished them, saying, “You did not obey me. So now, you will have to leave this Garden. You will have to live on Earth. Adam will have to work hard to grow crops and create food, and Eve will have to suffer the pain of giving birth.”

Adam and Eve are driven out of the Garden of Eden to live on Earth, as they disobeyed God and ate the fruit from the Tree of Knowledge.