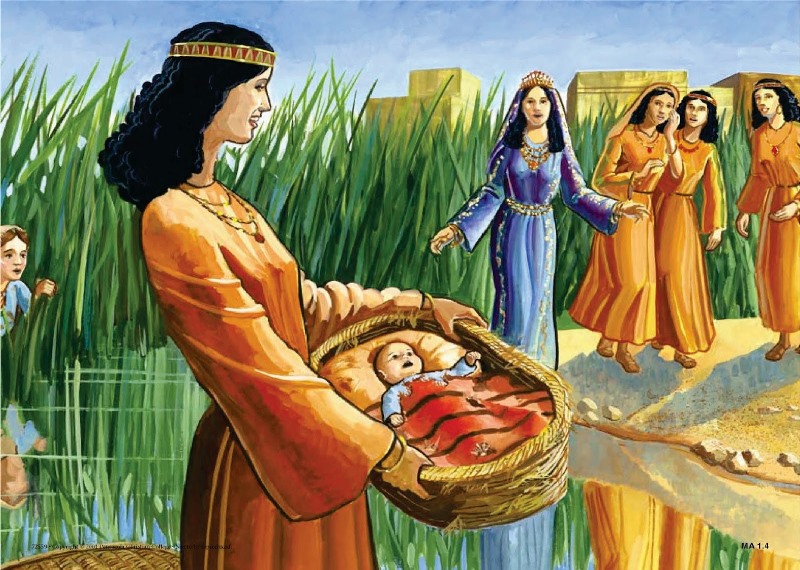 The Prince from the River

Prime minister Joseph was dead! All Egypt shared his family’s sadness. God had used Joseph the Hebrew to save the country from famine. He was a wise and beloved leader. Now he was gone.

Over three hundred long years passed. Joseph’s people, the Hebrews, had become a mighty race within Egypt. The new Pharaoh feared the Hebrews might turn against him, so he made them all slaves.

Pharaoh treated the Hebrews cruelly. He forced them to build great cities. But no matter how hard he worked them, the Hebrew slaves continued to grow in numbers.

One day, a dreadful command came from Pharaoh. “All new-born boys must be thrown into the river Nile.” Wicked Pharaoh was determined to reduce the number of Hebrews. He would even murder babies!

“What can we do?” one family must have wondered. They decided to put their child in the Nile River. But he would be inside a snug, water-tight basket.

Carrying its precious cargo, the small basket-boat floated among the reeds. Whatever would happen to the tiny baby?

From a distance, the baby’s sister watched the precious basket as it bobbed gently among the reeds.

Suddenly Pharaoh’s daughter and her servants came to the river to bathe. There was no way to hide the basket. Perhaps they would walk by without seeing it.

“Oh! A basket. There, in the reeds. I wonder what’s inside.” Pharaoh’s daughter commanded her servant to fetch the basket. When she opened it – the baby started to cry. “It’s a Hebrew child,” the princess exclaimed.

“Poor little thing. You’re so beautiful.” Probably Pharaoh’s daughter talked to the baby the way many grown-ups do. She may even have said “Ootchie-kootchie Koo-ums” in Egyptian, of course.

God must have given special wisdom to the baby’s sister. She ran to Pharaoh’s daughter. “Shall I find a Hebrew woman to look after the baby for you?” “Go ahead,” was the reply. Who do you think the girl ran to fetch?

“Mother! Come quickly! Oh, hurry!” Perhaps the girl didn’t have time to explain. Together, the two raced back down the footpath.

Back at the river, Pharaoh’s daughter held out the baby. “Nurse him for me. I will pay you. Call him Moses.” Moses may be Egyptian for water-son.

So Moses was returned to his parents and home. They taught him to love God and the Hebrew people. Soon he would live in the palace with Pharaoh’s
daughter. God, Who saved his life, had a great future planned for baby Moses.

The Prince From the River A story from God’s Word, the Bible, is found in Exodus 2