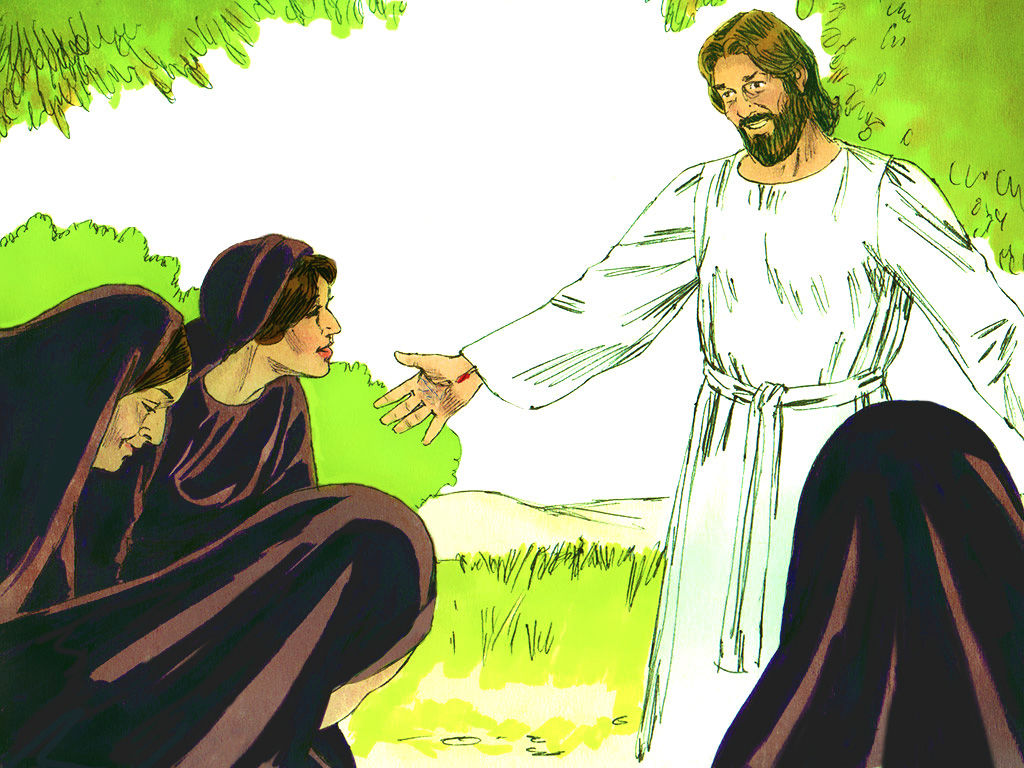 Story by Edward Hughes
Image is copyright of Sweet Publishing and digitally adjusted the copyright of www.FreeBibleimages.org

The lady stood on the noisy hillside, her sad eyes looking up to a terrible scene. Her Son was dying. The mother was Mary, and she stood near the place where Jesus was nailed to a cross.

How did all this happen? How could Jesus end such a beautiful life in such an awful way? How could God allow His Son to be nailed to a cross to die there? Did Jesus make a mistake about Who He was? Did God fail?

No! God didn’t fail. Jesus hadn’t made any mistake. Jesus always knew He would be put to death by wicked men. Even when Jesus was a baby, an old man named Simeon had told Mary that sadness lay ahead.

A few days before Jesus was killed, a lady came and poured perfumed ointment on His feet. “She’s wasting money,” the disciples complained. “She’s done a good work,” Jesus said. “She did it for my burial.” What strange words!

After this, Judas, one of Jesus’s twelve disciples, agreed to betray Jesus to the chief priests for 30 pieces of silver.

At the Jewish Passover feast, Jesus had His last meal with His disciples. He told them wonderful things about God and His promises to those who love Him. The Jesus gave bread and a cup for them to share. These were to remind them that Jesus’s body and blood were given to bring forgiveness for sins.

Then Jesus told His friends that He would be betrayed, and they would run away. “I won’t run away,” Peter insisted. “Before the rooster crows, you will deny Me three times,” Jesus said.

Later that night, Jesus went to pray in the Garden of Gethsemane. The disciples who were with Him fell asleep. “O My Father,” Jesus prayed, “… Let this cup pass from Me. Nevertheless, not as I will, but as You will.”

Suddenly a mob marched into the garden, led by Judas. Jesus did not resist, but Peter cut off a man’s ear. Quietly, Jesus touched the man’s ear and healed him. Jesus knew His arrest was part of God’s will.

The mob took Jesus to the high priest’s house. There, the Jewish leaders said Jesus should die. Nearby, Peter stood beside the servant’s fire and watched.

Three times people stared at Peter and said, “You were with Jesus!” Three times Peter denied it, just as Jesus said he would. Peter even cursed and swore.

Just then, a rooster crowed. It was like God’s voice to Peter. Remembering Jesus’s words, Peter wept bitterly.

Judas was sorry, too. He knew Jesus was not guilty of any sin or crime. Judas took back the 30 pieces of silver, but the priests wouldn’t take it.

Judas threw the money down, went out – and hanged himself.

The priests brought Jesus before Pilate, the Roman governor. Pilate said, “I have found no fault in this Man.” But the mob kept crying, “Crucify Him! Crucify Him!”

Finally Pilate gave in, and sentenced Jesus to die on a cross. The soldiers punched Jesus, spit in His face, and whipped Him. They made a cruel crown of long sharp thorns and pressed it onto His head. Then they nailed Him to a wooden cross to die.

Jesus always knew He would die that way. He also knew that His death would bring forgiveness for sinners who put their trust in Him. Two criminals were crucified beside Jesus. One believed on Jesus – and went to Paradise. The other didn’t.

After hours of suffering, Jesus said, “It is finished,” and died. His work was completed. Friends buried Him in a private tomb.

Then Roman soldiers sealed and guarded the tomb. Now nobody could get in – or out.

If this were the end of the story, how sad it would be. But God did something wonderful. Jesus did not stay dead!

Early in the morning of the first day of the week, some of Jesus’s disciples found the stone rolled away from the grave. When they looked inside, Jesus was no longer there.

One woman stayed, weeping by the tomb. Jesus appeared to her! She rushed back joyfully to tell the other disciples. “JESUS IS ALIVE! JESUS HAS COME BACK FROM THE DEAD!”

Soon Jesus came to the disciples, and showed them His nail-scarred hands. It was true. JESUS WAS ALIVE AGAIN! He forgave Peter for denying Him, and told His disciples to tell everybody about Him. Then He went back to heaven where He had come from.