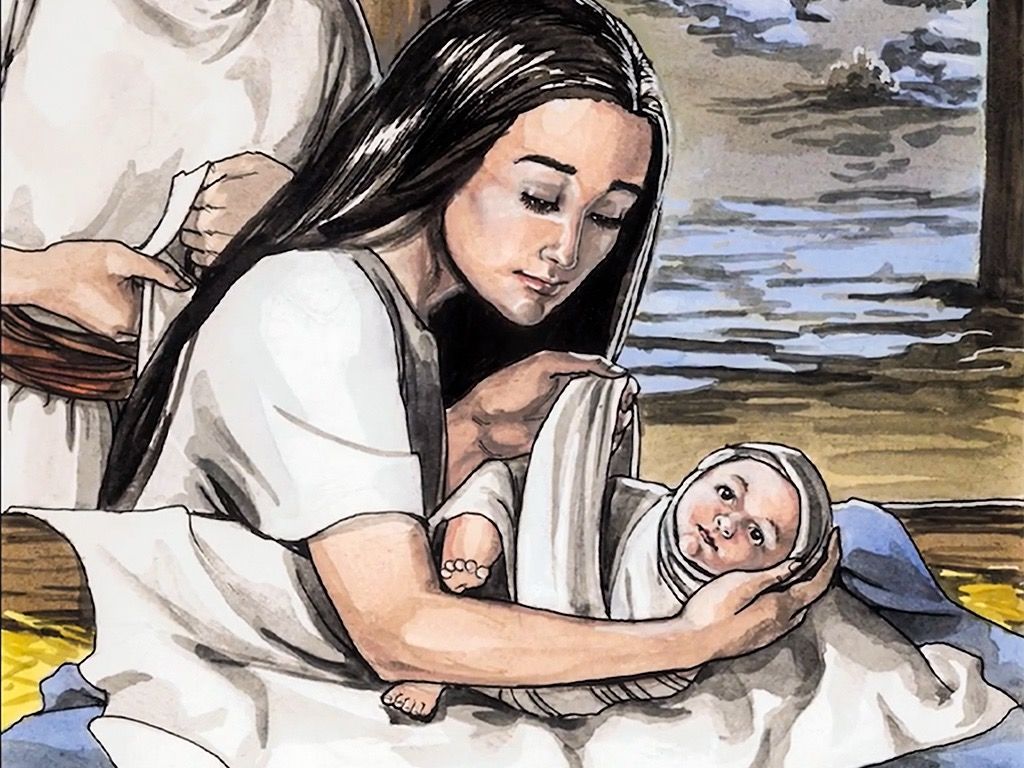 The Birth Of Jesus

Long ago, God sent the angel Gabriel to a sweet young Jewish maiden named Mary. He told her, “You will have a son and call His name Jesus. He will be called the Son of the Highest. He will reign forever.”

“How can this be?” the amazed girl asked. “I have not been with any man.” The angel told Mary the child would come from God. There would not be a human father.

The angel then told Mary that her cousin Elizabeth was having a baby in her old age. This was a miracle, too. Soon after, Mary visited Elizabeth. They praised God together.

Mary was engaged to marry a man named Joseph. Joseph was sad when he learned Mary was expecting a baby. He thought some other man was the father.

In a dream, God’s angel told Joseph that this child was God’s Son. Joseph was to help Mary look after Jesus.

Joseph trusted and obeyed God. He also obeyed his country’s laws. Because of a new law, he and Mary left for their hometown, Bethlehem, to pay their taxes.

Mary was ready to have her baby. But Joseph could not find a room anywhere. All the inns were full.

Joseph finally found a stable. There, Baby Jesus was born. His mother laid Him in a manger, a place where the animal’s food was usually put.

Nearby, shepherds guarded their sleeping flocks. God’s angel appeared and told them the wonderful news.

“There is born to you this day in the city of David a Savior Who is Christ the Lord. You will find the baby lying in a manger.”

Suddenly, many more bright angels appeared, praising God saying, “Glory to God in the Highest and on earth peace, good will toward men.”

The shepherds hurried to the stable. After seeing the Baby they told everyone they met what the angels had said about Jesus.

Forty days later, Joseph and Mary brought Jesus to the temple in Jerusalem. There a man named Simeon praised God for the Baby, while old Anna, another servant of the Lord, gave thanks.

But knew Jesus was God’s Son, the promised Savior. Joseph sacrificed two birds. This was the offering God’s law said poor people should bring when they presented a newborn child to the Lord.

Sometime later, a special star led Wise Men from an Eastern country to Jerusalem. “Where is He Who is born King of the Jews?” they asked. “We want to worship Him.”

King Herod heard about the Wise Men. Troubled, he asked them to tell him when they found Jesus. “I want to worship Him, too,” Herod said. But he was lying. Herod wanted to kill Jesus.

The star led the Wise Men to the exact house where Mary and Joseph lived with the young Child. Kneeling in worship, the travelers gave Jesus rich gifts of gold and perfume.

But Herod could not harm God’s Son! Warned in a dream, Joseph took Mary and Jesus to safety in Egypt.

When Herod died Joseph brought Mary and Jesus back from Egypt. They lived in the little town of Nazareth, near the sea of Galilee.