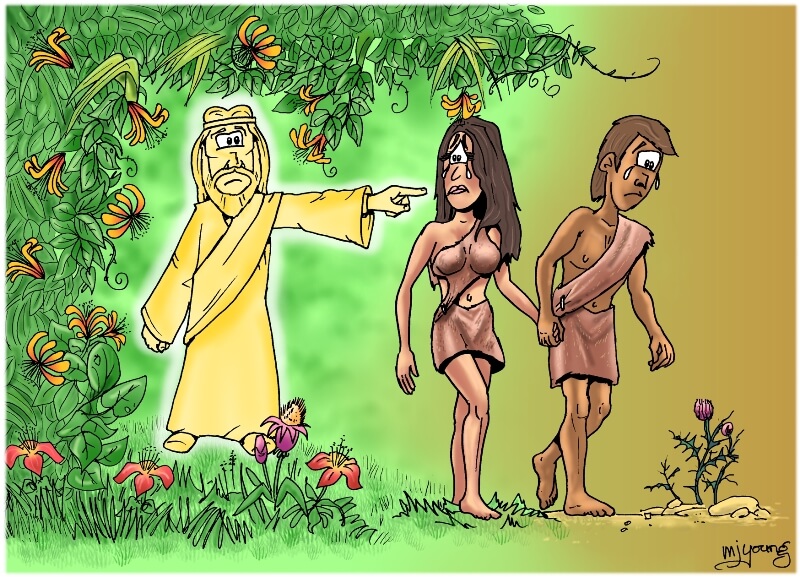 The Beginning of Sin

GOD MADE EVERYTHING!
When God made the first man, Adam, he lived in the Garden of Eden with his wife, Eve. They were perfectly happy obeying God and enjoying His presence until one day …

”You’ll become like God.” Eve wanted the fruit of that tree. She listened to the serpent and ate the fruit.

After Eve disobeyed God she led Adam to eat the fruit also. Adam should have said, “No! I will not disobey God’s Word.”

When Adam and Eve sinned, they both knew they were naked. Sewing fig leaves into aprons, they covered themselves and hid in the bush from God’s presence.

In the cool of the evening God came to the garden. He knew what Adam and Eve had done. Adam blamed Eve. Eve blamed the serpent. God said, “The serpent is cursed. The woman will have pain when children are born.”

”Adam, because you sinned, the earth is cursed with thorns and thistles. You will toil and sweat to get your daily food.”

God put Adam and Eve out of the wonderful garden. Because they sinned, they were separated from the life-giving God!

God made a flaming sword to keep them out. God made coats of skin for Adam and Eve. Where did God take the skins from?

In time, a family was born to Adam and Eve. Their first son, Cain, was a gardener. Their second son, Abel, was a shepherd.

One day Cain brought God some vegetables as a gift. Abel brought some of the very best of his sheep as his gift to God. God was pleased with Abel’s gift.

God was not pleased with Cain’s gift. Cain got very angry. But God said, “If you do what is right, will you not be accepted?”

Cain’s anger didn’t go away. Some time later in the field he attacked Abel – and killed him!

God spoke to Cain. “Where is your brother, Abel?” “I don’t know,” Cain lied. “Am I my brother’s keeper?” God punished Cain by taking away his ability to farm and making him a wanderer.

Cain went out from the presence of the LORD. He was married to a daughter of Adam and Eve. They raised a family.

Meanwhile, the family of Adam and Eve grew quickly. In those days, people lived much longer than today.

When her son Seth was born, Eve said, “God gave me Seth to replace Abel.” Seth was a godly man who lived 912 years and had many children.

In the world, people became more and more wicked as one generation followed another. Finally, God decided to destroy mankind and …

… all beasts and birds. God was sorry he had made man. But one man pleased God …

This man was Noah. A descendant of Seth, Noah was righteous and blameless. He walked with God.

He also taught his three sons to obey God. Now God planned to use Noah in a very strange and special way!