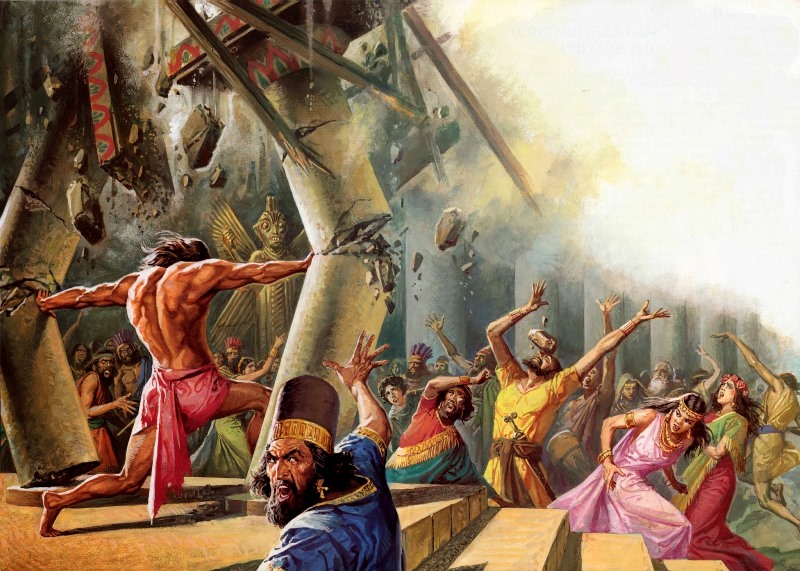 Long ago, in the land of Israel, lived a man named Manoah. He and his wife had no children. One day the Angel of the Lord appeared to Manoah’s wife. “You will have a very special baby” He said.

She told her husband the wonderful news. Manoah prayed, “Oh my Lord, come to us again. Teach us what we shall do for the child.”. The Angel told Manoah the child must never have his hair cut, must never drink alcohol, and must never eat certain foods. God had chosen this child to be a judge. He should lead Israel.

God’s people certainly needed help. They left God out of their lives, and then were bullied by their enemies, the Philistines. But when they prayed, God heard. He sent this baby who would become the world’s strongest man.

So the woman bore a son and called his name Samson, and the child grew, and the Lord blessed him. And the spirit of the Lord began to move upon him. Samson became very strong. One day he fought a young lion with his bare hands – and killed it!

Later, Samson tasted honey from a swarm of bees which had nested in the lion’s dead body. He made up a riddle: “Out of the eater came something to eat and out of the strong came something sweet.”.

Nobody could guess the meaning – but Samson’s new wife, a Philistine, told her friends. This made Samson very angry.

Samson was even more angry when the Philistines gave his wife to be wife of his best friend. He planned revenge. But how? First, Samson caught 300 foxes. The he tied their tails together, two by two, and placed flaming torches between them. Then Samson released the foxes in the Philistines’ grain fields!

But the Spirit of the Lord came upon Samson. He broke the ropes, picked up a fresh jawbone from a dead donkey, and killed 1000 enemies.

Philistines search parties looked for Samson. One night, they trapped him in a city and locked the city gates. But Samson walk out – carrying the city gate on his shoulders!

But Samson failed God. God gave him strength as long as he obeyed. One day, Samson shared the secret of his strength with Delilah, a beautiful Philistine spy. She had a man shave off Samson’s hair while he slept.

Then Philistine soldiers attacked Samson in Delilah’s bedroom. Samson fought hard – but his strength was gone. His enemies put out his eyes.

The Philistines had a feast. They praised their fish-god, Dagon, for giving Samson into their hands. They drank and rejoiced in Dagon’s temple. Then they called for Samson to perform for them.

A boy brought Samson, and let him lean on the pillars which held up the temple. There were 3000 Philistines on the roof, and many more in the temple, all mocking him.

But Samson’s hair had begun to grow in the prison. Now he prayed, “Oh LORD God, strengthen me just this once, that I may take revenge for my two eyes.”.

This short Bible story is found in Judges 13-16.