Copy link Report this postI'm concerned about this post. 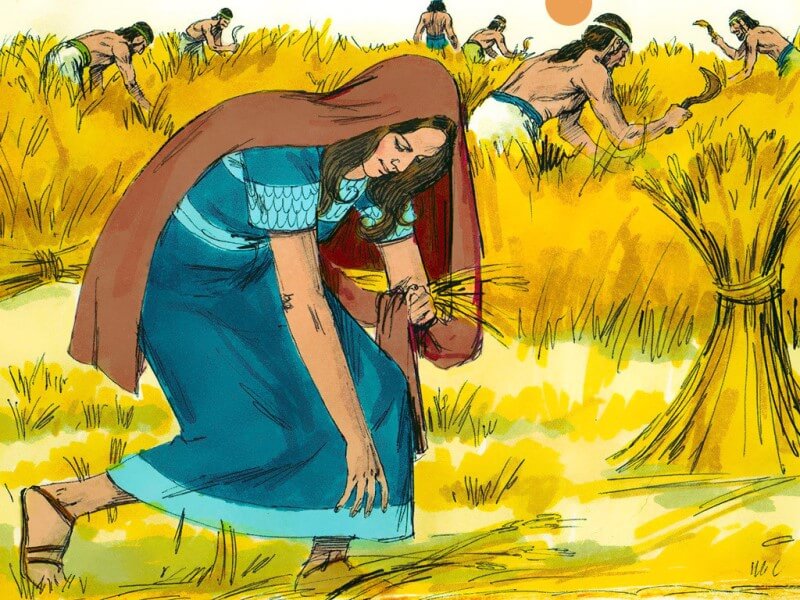 If you could meet your great-grandparents, their parents, and all the people who came before you in your family, you might be surprised by what kind of people they were.

In the Bible, one of Jesus’ human ancestors was Ruth – a Moabite lady who used to worship idols.

The story of Ruth starts in Israel after the time of Samson, when God’s people stopped trusting and obeying God. A terrible famine struck the land. Do you know what a famine is?

That’s right! A famine is when no fruit or crops grow, and animals and sometimes even people die from hunger.

One man, Elimelech, left Bethlehem with his wife and two sons, looking for food.

He went to Moab, a country where people worshipped idols.

Things did not go well for Elimelech and his family in Moab. He died, followed by his two sons.

His wife, Naomi, was left, along with the sons’ two wives, Ruth and Orphah. Both girls were from Moab.

Naomi, now a widow, heard that the LORD had visited His people, giving them bread. She decided to return to her homeland.

But what would the two girls do? Naomi advised them to stay in Moab and marry again.

Orphah went back to her own family. But Ruth refused. Instead, Ruth said a lovely poem which promised she would never leave her mother-in-law.

Naomi’s old friends were glad that she had come home to Bethlehem. But she asked them to call her “Marah” (bitter) instead of Naomi (pleasant).

“For the Almighty has dealt very bitterly with me.” Naomi had returned with nothing – except Ruth.

Although Ruth had worshipped idols like most people in Moab, she had turned from that to worship the Living God of Israel.

Ruth worked hard to make sure Naomi had enough to eat. Every day she followed the harvesters in the field and picked up the left-over grain.

Boaz, the owner of the field, heard how good Ruth was to her mother-in-law.

When he met her, Boaz helped her by ordering his harvesters to leave handfuls of grain behind on purpose. Boaz began to like Ruth.

When Ruth told Naomi about Boaz and his kindness, the older lady praised God. “The man is a relative of ours, one of our near kinsmen.”

As time passed, Boaz wanted to marry Ruth and look after Naomi and her family’s land. But another near relative had the first chance.

This man wanted the land – but he didn’t want Ruth for his wife. The law said he could not have one without the other.

In those days, people didn’t shake hands to settle a deal. Boaz took off a sandal and publicly gave it to the other man.

The business was settled. Ruth would become his wife. Now she and Naomi were part of Boaz’ family.

Boaz and Ruth called their first son Obed. He became grandfather to David, the great King of Israel.

But even more wonderfully, baby Obed was ancestor to the Lord Jesus Christ. Jesus came through David’s family line to be King of kings and the Savior of the world.

This Bible story tells us about our wonderful God who made us and who wants us to know Him.

God knows we have done bad things, which He calls sin. The punishment for sin is death, but God loves us so much He sent His Son, Jesus, to die on a Cross and be punished for our sins. Then Jesus came back to life and went home to Heaven! If you believe in Jesus and ask Him to forgive your sins, He will do it! He will come and live in you now, and you will live with Him forever.

If you want to turn from your sins, say this to God:
Dear God, I believe that Jesus died for me and now lives again. Please come into my life and forgive my sins, so that I can have new life now, and one day go to be with You forever. Help me to live for You as Your child. Amen.

Read the Bible and talk with God every day! John 3:16