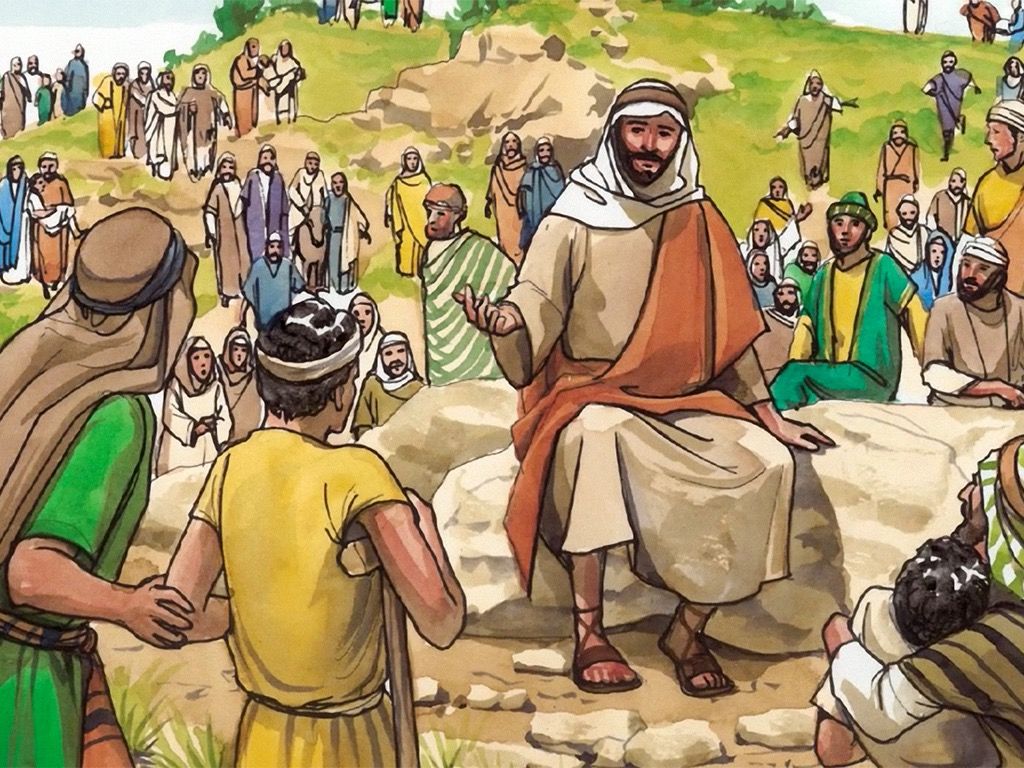 Jesus was a great teacher – the best ever. Crowds listened to Him. Jesus told them to be merciful, good and kind. Others may hate and hurt them, but God would care for them.

Jesus taught many things. He said God’s people light up the world the way a candle lights a house. What a difference a candle makes in a dark room!

The people Jesus spoke to believed in revenge, “An eye for an eye, a tooth for a tooth.” But Jesus taught kindness, forgiveness and love, even towards enemies.

In Jesus’s day, some people pretended to be very holy. When they gave money to beggars, they had a man blow a trumpet so everybody would look. “Do your giving in secret, and God will reward you,” Jesus said.

Jesus taught the same about prayer. Some people prayed on busy street corners so everyone could see and hear them. They didn’t care about God. They cared about what others thought of them. Jesus called them hypocrites – false actors.

Jesus often used nature to explain His teaching. For example, He pointed to the birds. “Your heavenly Father feeds them,” He said. “Don’t worry. God will also feed you.”

“Even rich King Solomon was not as well dressed as the lilies,” Jesus continued. “If God clothes the grass of he field, will He not also clothe you?” Jesus was teaching people to trust God Who provides for all our needs.

“If you judge your brother, it’s like trying to take a speck of sawdust from his eye when you have a great big log of wood in your own eye,” Jesus said. Perhaps people chuckled. But they had to think of His meaning.

Jesus said people should ask God for help. Do earthly fathers give a lump of stone when hungry children ask for bread? No! They give good things. God also gives good things to those who ask.

Jesus, the great teacher, warned about false teachers. “They dress like sheep,” Jesus said. “But inside, they are wolves!” He said false teachers would be known by the lives they lived.

In a story He told, Jesus showed that people who obey God’s Word are like a man who built his house on a rock. A terrible storm arose. When it ended, the house stood firm.

But a foolish man built his house on sand. When the storm slash against it, it fell apart because of its weak foundation. Jesus said that people who do not obey God’s word are like that man.

The crowds were amazed at Jesus’s words. They had never heard such things before. Now they knew it was not enough to hear God’s Word. They must also obey it each day.