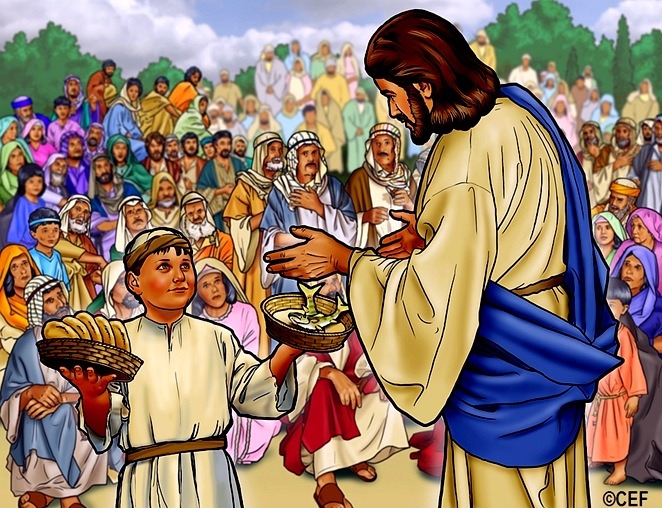 Many religious leaders (called Pharisees) told lies about Jesus. Some even tried to kill Him.

One day, Jesus crossed the Sea of Galilee. Perhaps He wanted a little break from the crowds which always gathered around Him. But the crowds soon found Him. They knew Jesus did great miracles. They wanted to be with Him.

Jesus led His disciples to a deserted mountain spot where He sat, teaching. More and more people kept coming. Soon it was suppertime. Everybody must have been hungry.

Jesus looked at the crowd. “Were shall we buy bread that these may eat?” He asked Philip. There were no food stores around. What was Jesus planning to do?

“It would cost a fortune to feed this crowd”, Philip answered Jesus. Jesus and His disciples did not have much money.

Another disciple, Andrew (Simon Peter’s brother) said to Jesus: “There is a lad here who has five barley loaves and two small fish, but what are they among so many?” Andrew didn’t see how the little boy’s lunch could feed very many people – even if the boy were willing to give his lunch to Jesus.

Jesus said, “Make the people sit down.” So the men sat down, in number about five thousand. Wow! FIVE THOUSAND! That didn’t even include the women and children who were there also.

Next, Jesus took the loaves and fish. The little boy must have trusted Jesus. He didn’t know why Jesus wanted his lunch, or what Jesus would do with it. He may have thought, “If I give my lunch away, I can’t eat.” But he gave it to Jesus anyway.

Then Jesus prayed. He gave thanks to God. For five loaves and two fish? Yes! Jesus said “Thank You” to God and asked Him to bless the food.

After everybody was fed, there was still a lot of bread and fish left over. “Gather up the fragments so that nothing is lost,” Jesus told the disciples. They filled twelve baskets with the fragments of the five barley loaves which were left over by those who had eaten.

When ordinary people saw these signs, they weren’t angry like the Pharisees. Instead they said, “This is truly the Prophet who is to come into the world.” They knew Jesus was the Savior whose coming was promised in God’s holy Word.

This story is found in John 6