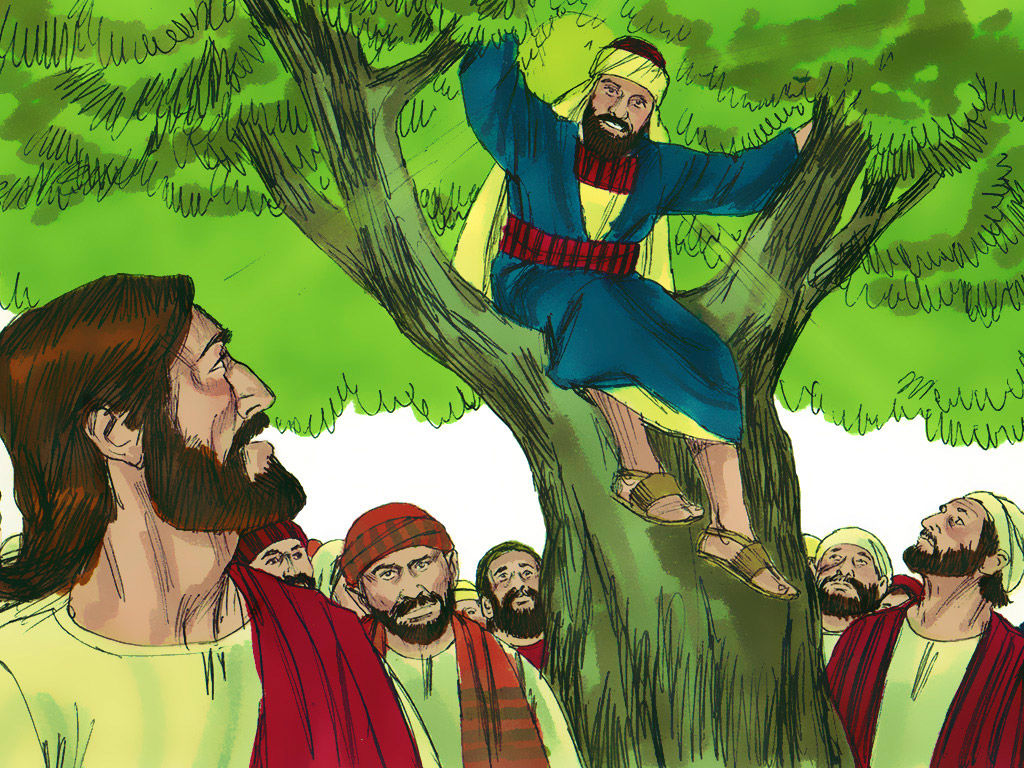 Story by Edward Hughes
Image is copyright of Sweet Publishing and digitally adjusted the copyright of www.FreeBibleimages.org

One day, Jesus passed through Jericho. This city had been destroyed by Joshua long ago. Now it was rebuilt and many people lived there. Among them was a man named Zaccheus.

Probably the other people in Jericho did not like Zaccheus very much because he collected tax money from them. Zaccheus sent some of the money to the government – but kept a lot for himself.

Being a tax collector made Zaccheus very rich. His house may have been the BIGGEST and the BEST in the block.

But he was also very short – not short of money, nut short of height. Zaccheus had never grown as tall as other people.

When Zaccheus heard that Jesus was in Jericho, the little tax collector wanted to see the Man from Nazareth Who claimed to be God’s Son. But the crowds were thick… the people tall.

Zaccheus had an idea! If he could get ahead of the crowd… climb a tree that overhung the road… he would be able to see Jesus.

Climbing up a sycamore tree, Zaccheus found a comfortable fork in the branches and settled down to wait for Jesus. “I’ll have a good view,” he may have thought. “I will see Him without being seen.”

“Zaccheus, hurry and come down.” The little tax collector could not believe his ears. Jesus stood under the tree. Jesus was looking at him. Jesus was calling him!

If Zaccheus was surprised to hear Jesus call him, he must have been amazed when Jesus said, “Today I must stay at your house.” Zaccheus came down so fast he almost fell.

Zaccheus was thrilled that Jesus would visit his house. But the people didn’t like it. They complained that Jesus should not visit a sinner like Zaccheus.

Jesus brought a whole new life to Zaccheus. Zaccheus said, “Lord, I give half my goods to the poor. And if i have cheated anyone, I will give back four times as much.”

Jesus was pleased at Zaccheus’s new life. He loves to see people turn from sin and do what is right. Jesus said, “The Son of Man came to seek and to save that which was lost.” That day in Jericho, Jesus found Zaccheus!

This short Bible story is found in Luke 19