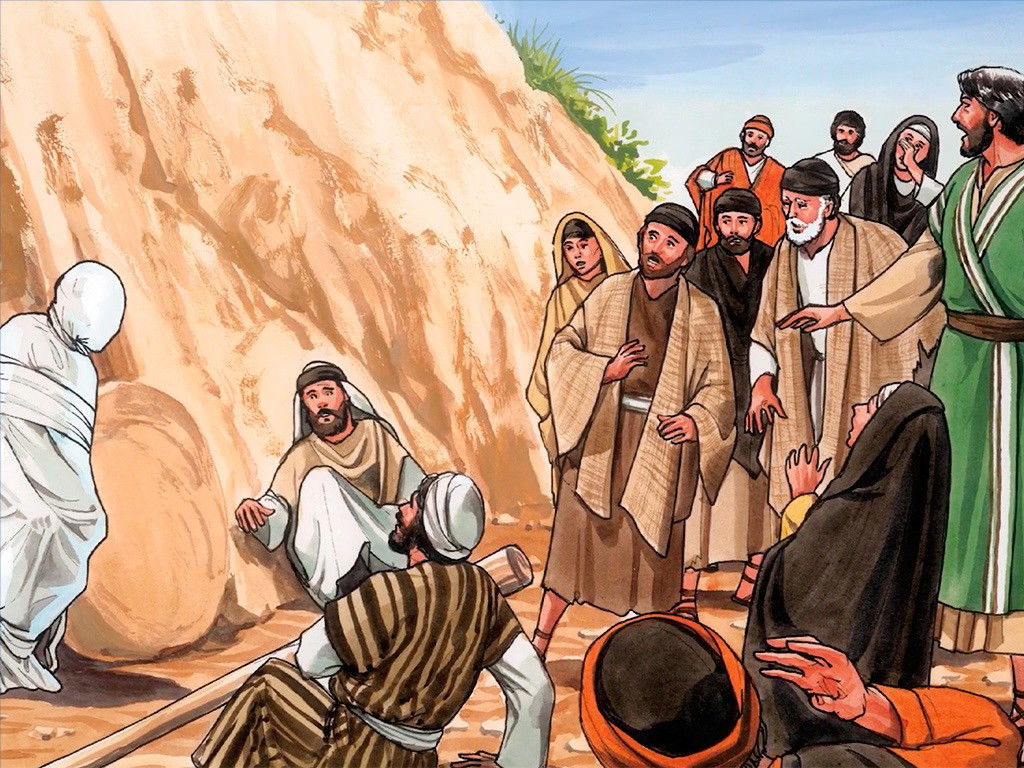 Mary and Martha were worried. Their brother Lazarus was sick, very sick. The sisters knew Lazarus might die soon. They sent for Jesus. He loved this little family from Bethany.

When Jesus heard about Lazarus He told His disciples, “This sickness will not end in death.” Although Jesus was many miles away, He knew exactly what was going to happen to Lazarus.

Jesus waited two days before leaving for Bethany. Then He said something which puzzled His disciples. “Lazarus is dead. I’m glad I was not there so you may believe.” What did these strange words mean? What was Jesus planning to do?

When Jesus arrived at Bethany, Lazarus had been dead for four days.

His body, wrapped in grave clothes, was in a cave-like tomb.

Martha went to meet Jesus. “Your brother will rise again,” Jesus said. “I know – in the resurrection at the last day,” Martha replied. She thought she had to wait until the end of time to see Lazarus again.

But Jesus meant something different.

“I am the resurrection and the life,” Jesus told Martha. “He who believes in Me will live even though he dies.” Martha believed Jesus. She knew He was the Son of God. But how could He help Lazarus?

Everybody was sad because Lazarus had died. His sister Mary was crying. So were her friends whi tried to comfort her. Jesus cried too.

Jesus went with the people to the tomb. A large stone lay across the doorway.

“Take away the stone,” Jesus commanded.

“Lord,” Martha answered, “by this time there is a stench, for he has been dead four days.”

At Jesus’s command the men took away the stone. Then Jesus prayed to His heavenly Father. Jesus was about to perform a miracle so great that people would know God sent Him.

“Lazarus!” Jesus shouted. “Come out!” The people must have stared at the cave in amazement. Could Jesus make a dead man live?

Yes! Lazarus came out of the cave, all wrapped up in a grave clothes – ALIVE!

What joy there was! Tears turned to laughter. Jesus had kept His word. Lazarus was alive again. Only God’s Son could give life to a dead man.

Many people who saw this miracle believed in Jesus. But some others reported Him to His enemies – the temple leaders. Jealously they plotted to kill Jesus. When Jesus knew this He went away for awhile.

This short Bible story is found in John 11