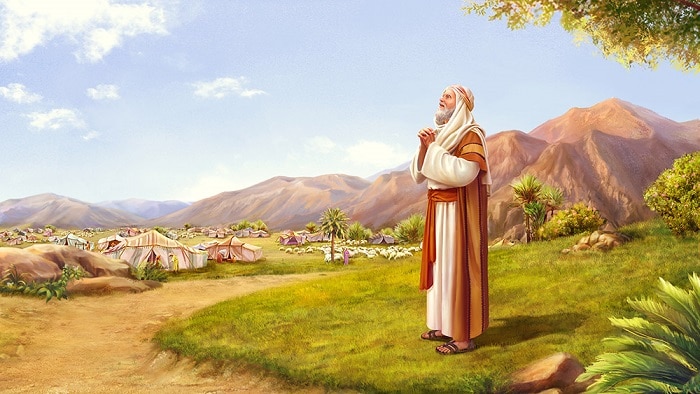 Long after the flood, people on earth made a plan.

“We will build a great city with a tower right up to the heavens,” they said. “Let’s live together always.” Everyone spoke the same language.

God wanted people to live across the world He had made. So He did something special. Suddenly, groups of people spoke differently. God gave them new languages.

Those who spoke the same language move away together. Perhaps people became afraid of others they could not understand. In this way, God caused people to fill different countries.

The city they left was called Babel, which means Confusion.

Years later, in a place called Ur of the Chaldees, God spoke to a man named Abram. “Leave this land,” God commanded. “Go to the land I will show you.”

Abram obeyed. God led him to Canaan. His wife Sarai and nephew Lot went with him.

In Canaan, both Abram and Lot became rich. They had large herds of cattle. There was not enough pasture for so many animals.

Lot’s herdsmen quarreled with Abram’s herdsmen. “Let there be no trouble,” Abram said. “We will separate. Lot, you take first choice of the land you want.”

Lot chose a great grassy plain dotted with cities and villages. It looked good. But the cities were very wicked places.

After Lot left, God spoke again to Abram. “I give all the land of Canaan to you and your children forever.”

Abram and Sarai had no children. How could God keep His great promise?

Three men from God came to Abram and Sarai.

“You’ll have a baby soon,” they said. Sarai laughed. She did not believe God’s message. She was ninety years old.

God told Abram he would now be called Abraham “father of many” and Sarai would be Sarah “princess”.

God also told Abraham He would destroy the two wicked cities of Sodom and Gomorrah. Abraham’s nephew Lot lived in Sodom with his family.

Lot believed God’s warning when it came, but his daughter’s husbands refused to leave Sodom. How tragic! They didn’t believe God’s word.

Only Lot and his two daughters made it to safety. Fire and brimstone fell upon the wicked cities.

Sadly, Lot’s wife disobeyed God’s warning and looked back as she ran. She turned into a pillar of salt.

The LORD kept His promise to Abraham and Sarah. They had a child in their old age, just as God had said. How they rejoiced when Isaac was born!

Perhaps Abraham also thought about God’s promise to give him and his children the land of Canaan forever.

God would keep that promise, too. God always keeps His promises.