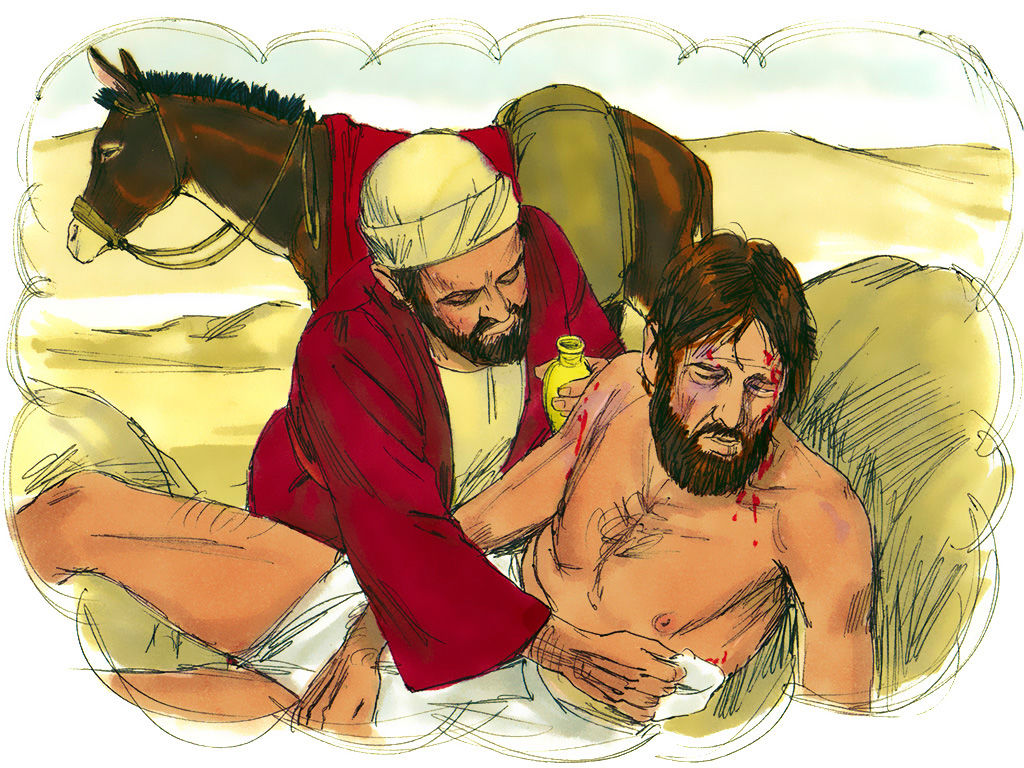 The original image is copyright of Sweet Publishing and digitally adjusted copyright of www.FreeBibleimages.org

“Teacher! What must I do to receive eternal life?” The man who asked the question was a lawyer, trying to trick Jesus.

“Love God and your neighbor,” the man said. “But who is my neighbor?” he asked.

To answer the man’s question, Jesus told a story about a man traveling on the road from Jerusalem to Jericho. The man was attacked by thieves.

The thieves stole everything they could find, even taking the unfortunate traveler’s clothes.

They also wounded him badly, leaving him half dead at the side of the road.

Now by chance a certain priest came by. Surely he would help the wounded man.

No! When he saw the man bleeding, he passed by on the other side of the road.

Soon the pad of feet announced the approached of another person. He was a Levite–a man who helped the priests at the temple.

He went and looked at the hurt man, then walked away without helping.

People listening to Jesus’s story would not expect a Samaritan to be the hero. But he was. The Samaritan cared, and stopped to help.

The Samaritan knelled, and gently put medicine and bandages on the stranger’s wounds. Then he helped the hurt man onto his own donkey.

At a roadside inn, the Samaritan took care of the man all night.

In the morning he paid the innkeeper to care for the traveler until he was well again.

The story ended. Jesus asked, “Who was neighbor to the hurt man?”

The lawyer answered, “His neighbor was the Samaritan who showed mercy.”

“Go, and do likewise,” Jesus said. A neighbor is anybody in need. We can show love by helping people in need. That pleases God.

This short Bible story is found in Luke 10