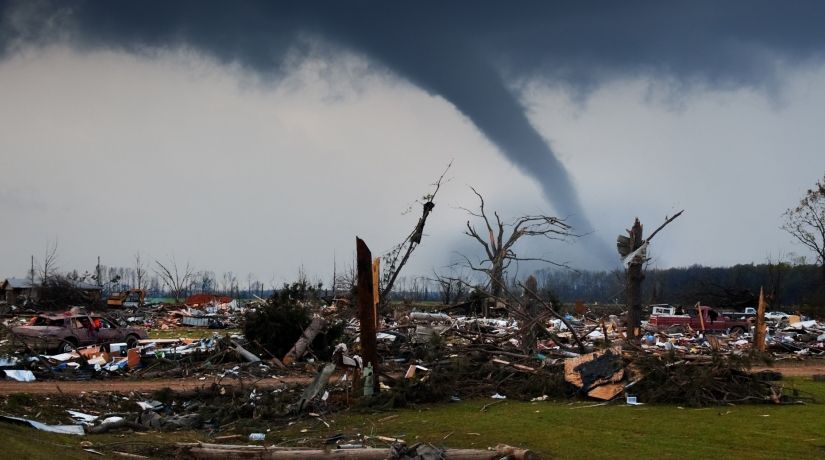 This is a difficult question. It cannot be answered by simply quoting a Bible passage. It requires a careful study of God’s nature, how He relates to the natural world, and the link between humans, sin, and nature. These are huge theological topics that always lead to differences of opinion among scholars. Here are some aspects of the topic that appear to be clearly present in the Bible.

1. The Link Between Humans and Nature: When God made humans in His image and gave them dominion over the natural world, He set them apart from the rest of creation as unique (Genesis 1:26, 27). At that moment a close connection was established between humanity and nature. Creation was placed under the dominion of humans; creation’s fate was to be determined by the choices and decisions of humanity. Humans, as God’s representatives, were to rule over nature as God intended. The link between nature and humanity was so deep that upsetting the moral order of humans would upset the way the world functioned.

Once sin and evil entered into the world everything changed (Romans 5:12). Because of Adam’s and Eve’s rebellion, the rest of the natural world “was subjected to futility” (Romans 8:20). Humans and nature now both groan under the burden of evil and sin (verse 22). But the connection between humans and nature is also for good. Humanity’s redemption includes the redemption of the natural world. Nature “will be delivered from the bondage of corruption” (Romans 8:21" href="https://www.biblegateway.com/passage/?search=Romans+8%3A21&version=NKJV">Romans 8:21; cf. Isaiah 65:25).

2. God as Creator, Sustainer, and Preserver of the Natural World: The first thing the Bible tells us about God is that He created “the heavens and the earth” (Genesis 1:1). Apart from God everything else in the universe has to be labeled “created.” This establishes a wide distance and distinction between God and His creation that is salvaged only through His love and the mediation of His Son.

Creation is by nature finite; only God is infinite. Therefore, God is the one who sustains the natural world. Left to itself the natural world would break down into chaos and cease to exist. Nature does not possess life in itself, so it cannot preserve itself. God through Christ is the one who holds it together and protects it (Nehemiah 9:6; Colossians 1:17). God not only sustains nature; He also preserves it. The existence of the natural world is threatened by the presence of evil powers within God’s creation. So God fights against the forces of chaos, limiting their inroads into the natural world, promising to free it from its bondage to decay (Job 38:8-11; Psalm 107:29; Romans 8:21" href="https://www.biblegateway.com/passage/?search=Romans+8%3A21&version=NKJV">Romans 8:21).

3. God, Natural Disasters, and Sin: Natural disasters are to be expected in a world of sin and evil. They are not the exception to the rule, they are the rule. What is unusual is that there aren’t more of them. The “sometimes” presence of natural disasters tells us that God is still in control, sustaining and preserving nature.

But there is another dimension of the interaction between God and natural disasters: Sometimes God uses nature to enforce His will on humanity. When that happens, He usually intends to limit human sin and open new possibilities for His creatures (e.g., Genesis 6:5-8; Amos 4:6-11). Correctly identifying those particular cases is very difficult.